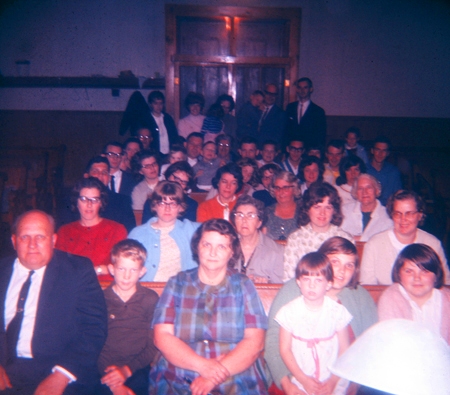 {From the archives} As Easter came and went this year, I realized in my post-candy-“He is Risen”-haze that I didn’t really feel connected to Jesus this Easter.

I can remember Easter’s past, when just hearing the name “Jesus” would cause my eyes to swell with tears and my throat to tighten. This was not that year. In fact, I felt little of nothing and that made me feel, well, a little guilty.

And as I was lying in bed on Sunday night, I tried to talk to God and understand just where I went wrong this Easter. I concluded, based upon His silence, that while I wanted to say that He just doesn’t care about the things that I care about–the truth is, I haven’t been caring about the things He cares about.

I realized however, that I wasn’t the only one left feeling empty and disconnected this Easter. Except that this was new to me. I’ve never had an Easter like this, but I shouldn’t be surprised because…

But there is one glaringly obvious reason as to why church is hard. It explains all the heartache, disappointment, loneliness, isolation, disillusionment, and even anger that so many of us in the church experience…

Church is hard because it is made up of people.

Church is hard because it is comprised of imperfect, albeit new, creations.

Church is hard because just like family, you can’t really pick your church–a building, sure–but the body as a whole, no.

Church is hard because we are the church. Period.

And let’s be honest, sometimes we can be spiteful, judgmental, cruel, unloving, unkind, and anything but Christ-like. We make church hard.

I heard Frank Viola make this point once too: Have you ever noticed that the majority of the New Testament is comprised of letters written to churches in crisis? Paul wasn’t writing Corinth to congratulate them on a job well done, so much as to say “Hey, that guy who’s sleeping with his dad’s wife…uh, get rid of him.”

And if the first century church, still basking in the glow of Christ’s presence of earth, was struggling with so many of the same things we struggle with today, well, we should find that comforting, if not also a little convicting.

So as I sit struggling with some of the biggest questions I have ever grappled with in terms of my faith, I think the church is failing me. I want to scream “Don’t you see me? Don’t you see me crumbling?” I could blame them, point fingers at them, tell them that they have excluded me, forgotten me, misunderstood me.

But then, I am struck with the awesome understanding that this whole church thing isn’t so much about me, as it is about Him. He hasn’t accused me. He hasn’t abandon me. He hasn’t excluded or forgotten me…and He never will.

Who am I to question the means through which God chose to display His glory? He chose, in His infinite wisdom, to make us–the broken, contrite, lowly, and unlovely His beloved.

The Church, comprised of people, is God’s plan A. There is no plan B.

But that also means, church is hard.

Church is hard because people are messy, because family is messy.

Church is hard because often those closest to us, can hurt us the most.

Church is hard not because God made a mistake, but because we make mistakes.

And yet, it is still His representation to the world. It is still the imagery of the Bridegroom and the Bride. I’m not where I want to be in this whole broken family. I’m not feeling the most loved among its members right now, but when I stop to consider Her, I am amazed. I stand in awe of Him choosing us to show Himself. The Bride, in all her brokenness…just as lovely.

Do you find being in the church and being the church hard? Why or why not? When have you found church to be the most difficult?