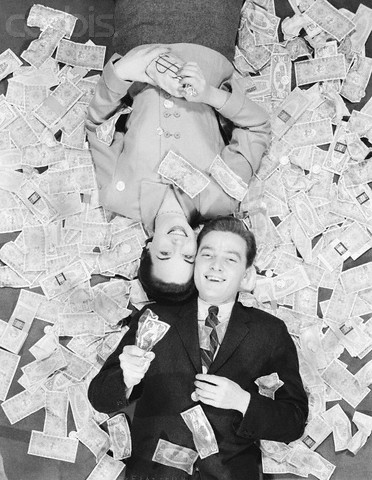 The issue of Christians and money gets a lot of people’s pantaloons all in a bunch. We think of  negative stereotypes: Television evangelists trying to swindle widows, prosperity preachers selling you a shinier, prettier Gospel, rich Christians who spend generously… on themselves, that is.

On the flip side, some people think believers are called to a humble, pious, and decidedly broke life. While others see no harm in rollin’ in dough, including driving a fancy car or owning a shamelessly large house. They say you can, of course, still love Jesus and be wealthy.

Alright, so Christians can be rich. I know a few (I covet their shiny SUVs and their expensive looking handbags). But should Christians be rich? Are you already forming your response? People have visceral reactions regarding the topic of money, including anger, guilt, or shame.  Here’s what I think about Christians and money…

I think God grants wealth  to whom He chooses–it just happens to suck if that person ain’t you. Jesus warns us about the love of money, the entrapment of money, and the temptation of money. He never says, however, “Run away from money!” Or, “If you see money, don’t touch it!” Not to mention that one of the most misquoted verses in the Bible, which happens to be from Christ, is “the love of money is the root of evil,” not money itself. Christians get this one wrong all the time, not to mention everyone else.

There are many verses in scripture that point to God actually dispensing money as provision (go figure, huh? ‘Cause that’s what I think of money as… provision). Deuteronomy 8:18 says, “But you shall remember the Lord your God, for it is He who is giving you power to make wealth.” I don’t know about you, but I think this verse is sweet. It is the Lord who gives us power to make money.

Right there, people who want to call money or wealth evil should be silenced. Also, anyone who thinks Christians should be poor must reconcile that idea with the Deuteronomy verse. God allows certain people the power to make money.

So, what should the rich do with their money and what about the rest of us who may not be blessed with superhero dollar-producing skills?

In his book, Neither Poverty nor Riches, New Testament Scholar Craig L. Blomberg says this:

“In the most affluent or suburban Western communities, it is impossible to detect any outward differences between the expenditures of professing Christians and the religiously unaffiliated who surround them in their neighborhoods.”

Are we spending millions on Starbucks, but ignoring the basic needs of those around us? Do we give generously because we have been given to generously?

The world sees how Christians spend (or don’t spend) money. They pay attention, even when we think they don’t. God desires Christians to use money to advance His Kingdom, feed the hungry, take care of the orphan and the widow. I’m not just talking about the local church’s money either. I’m talking about our money… my money… your money.

Did you know too that the Bible actually says “money answers everything”? I had no idea, but it’s in there, right in Ecclesiastes 10:19. Money answers everything. Americans do believe this, but the question is, what are we trying to answer with money? Are we trying to buy fulfillment, contentment, or happiness (material possessions, things, and stuff)? Or are we buying freedom, health, provision (giving to the poor, needy, hungry, and hurting)?

I am convicted even as I sit and write this post. If I were to take an inventory of my expenditures over the last 6 months, or even 3 weeks, I don’t think I would be too happy about what I would find. I do not give generously. I give marginally.

I believe the Lord allows and even desires for some Christians to be rich. Besides that fact, He also desires that everyone of us use money to further His Kingdom, whatever amount of money He leads us to give.

The Resurgence puts it this way: “If our hearts belong to Jesus and our lives are devoted to his mission, we need not avoid, demonize, or fear money. We can love God, love people, and use money to enjoy life and do ministry.” We do not need to attach emotions or stigma to money. We simply need to attach Jesus to every dollar we spend. Sounds simple enough? I’m still working on it.

Do you think Christians should be rich? Do you think the Church as a whole handles the issue of money well, or not so well? How do you view money and giving in your own life?

31 thoughts on “Should Christians Be Rich?”