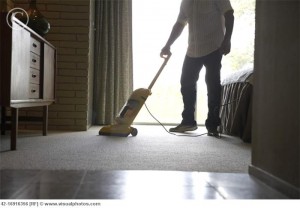 Today’s post is from Antwuan Malone and is the second part in our “Christian and sexy” series. Last week we discussed singles. Today we are talking about married people. To read my thoughts on whether or not Christians be married and sexy, head over to Antwuan’s blog.

At a marriage conference several years ago, someone performed a skit about how sexy it is to see a man, of all things, vacuuming a floor. Yes, vacuuming the floor. Seriously. I mean, the guy in the skit grabbed that vacuum, and the ladies in the crowd went bananas. You’d think it was Bradley Cooper or Johnny Depp or <insert your fave Hollywood hunk here>.

Funny because when those aforementioned hunks of Hollywood show up on screen, they don’t seem to need a vacuum, or a dust mop, or a “kiss the cook” apron for the ladies to swoon. I’m just saying. I could go on about that but there’s a word limit to adhere to and question to answer.

The question: Is it okay to be married, Christian, and sexy?

Like the post about Christian singles and sexiness, we’d have to begin with what the heck “sexy” is in the context of marriage. Is it different than when we are single? Is there more to it? Less? One thing is for sure, there was nary a mention of brooms or dust mops in the “single” comments!

I still say that “being sexy” is appealing favorably to the sexual preferences of men and/or women.

We could probably post an entire series about what sexiness is and what it means to people. The conversation would be interesting, to say the least. But that’s not today’s topic. Today, we’re asking if sexiness, however defined, has a place in Christian marriages.

Uh… yes. In fact, I’d say yes to sexiness in marriage more emphatically than I would for singles.

One of the biggest problems in marriages is that both parties end up putting sexiness on the back burner, as if it was the bait for the fish, instead of fuel to the engine. Ok, well, Jesus should be the fuel. So maybe sex is like the power steering fluid. Sex and sexuality help make marriage ride a
little smoother.

I mean, you could steer without it power steering fluid, but why would you? It’s so much more difficult.

So yes, sexiness in marriage is not only okay, it’s recommended! I think both parties would agree. So fellas, if that means grabbing a vacuum, then however dorky and completely, illegitimate as that may sound, you probably should work the vacuum. Ladies, same for you, though I don’t think vacuums play much into your sexiness.

All jokes aside. Many people speak for hours about this topic. It’s hard to sum it up in a short blog. So I’ll say this. Marriage is hard work. Families are hard work. And because of that, couples often lose each other in familial duties, roles, finances, jobs, kids, etc…

In all of that, couples can’t forget to have fun together. To tease (sexually and otherwise). To flirt. To illicit sexual desire from your mate. To continue to hunt (fellas) and be hunted (ladies). (Perhaps another post for another time).

There’s no one else we’re allowed to entertain any sexual thoughts with but our spouse. And that’s hard for men. Last week, we talked about sexy singles being a stumbling block to sin. In marriages, it’s the reverse. No sex, no sexuality, no sexiness often can lead to men sinning. It’s just too easy to find sexuality around us when we’re not looking for it. Close the window and the thief can’t get in, if you know what I mean.

And fellas, while sexiness does have a more physical element for us, we need to do what it takes provide the non-physical intimacy she desires. I call it heart sex (which frankly, leads to more real sex). Attending to her, appreciating her, listening to her, helping around the house — these equate to sexiness for many a married woman, regardless of how much bacon you bring home. These actions will no doubt help carry your marriage far.

So Christian, married, and sexy?

Antwuan Malone is a freelance writer and blogger at www.antwuanmalone.com: Candid Christianity. There he likes to engage in relevant Christian conversation about challenges facing the church both from within the church and outside of it. To read more from Antwuan, check out this post on being judgmental

16 thoughts on “Married, Christian and Sexy”