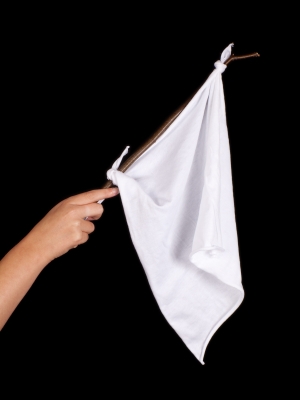 As I was counting down to September (my baby’s due date), I realized that the year is more than half over. At the start of 2011, I was all smiles and gumdrops, but as the year has progressed, I’ve sobered up a bit.

Back in January, I shared with you that I choose a word each year as a sort of alternative to a New Year’s resolution. I don’t just randomly select words either. I start by praying and it just so happens that, within seconds of praying, I usually have a word pop into my head.

This year’s word has been “surrender” and, let me tell you, it has sucked.

As soon as I heard the word “surrender” I wanted to do the opposite and run away Jonah-style. Um, surrender? No thank you, I’d politely tell God. To which He would just laugh. Instead of fleeing at full speed, I kinda-sorta surrendered and said “okay.”

Surrender is not simple. Nor is it painless or fast. It is basically the opposite of those things actually. I have learned, so far, that the sooner I just do it, the sooner it will be over–until my next moment to surrender comes along.

So what have I had to surrender to this year so far, you ask. Well, let me tell ‘ya…

Modern Reject. Not so long ago I realized that this blog had become an idol for me. I was consumed with checking my traffic, counting my comments, trying to “make it something.” I got whacked upside the head on this one and I quickly surrendered it over to Him.

My desire to have children. I suppose there is a whole separate post in this story, but I’ll share the quick version. I really wanted a third baby, but, whenever the hubster and I prayed, we felt like we shouldn’t proceed. So we didn’t. Meanwhile, my baby cravings grew stronger and stronger. I became sad. If I’m not suppose to have a baby, then please God take away this overwhelming desire.

I lay in bed one night, literally crying out to God to take away the desire. Finally, I said, “Forget it. I don’t want another baby. I only want what YOU want.” And I meant it. Surrender. The very next day, I realized my period was a week late. I took a test. Positive. Baby #3. God gave me 1Samuel 2.

My family and their salvation. I’m the only Christ-follower in my family. I’m careful to say “Christ-follower’ because if I say “Christian” others would disagree with me. They think they are Christians, but they do not live lives devoted unto Christ. Jesus is not the centerpiece of their lives.

Last summer, some tumultuous family issues erupted, some of which I was responsible for. I took responsibility, apologized, and asked for forgiveness where needed. However, since then I have been verbally attacked by members of own family. I have been slandered and misquoted, mistreated and ignored. So what’s a girl to do? Surrender. I have had to surrender these relationships over to the Lord.

Amazingly, God has actually allowed one of these relationships to produce the opposite effect. One member of my family has actually moved towards God instead of away through all of this. They have asked the right questions instead of brooding in silence. I believe some of this fruit is a result of me surrendering this relationship to God, as well.

So, when it’s all said and done, I have surrendered much this year. I have given up or given over more than I would have liked, more than I would have expected. Turns out, I am thankful for the pressure from the Lord forcing me to surrender. I am so thankful for the rewards, grace, and undeserved blessings He has poured out as a result. I am grateful, but don’t get me wrong…it still sucks.

Okay, so the obvious questions: What have you surrendered to lately? How has that been? And what has the Lord been specifically teaching you this year? What has been the theme of the year for you?