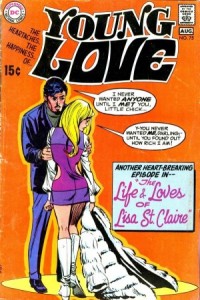 So many of us are desperately looking for answers when it comes to dating, relationships, and marriage. One of the biggest decisions we will ever face is in choosing our future spouse. Is he/she the right one? How do we know we aren’t making a gargantuan mistake?  And where’s God in all of this? What does He have to say on the subject?

Turns out, not much. I mean, God doesn’t have as much to say as we would like to think. I know this from personal experience. You see, when I started dating my now husband, an old flame of mine re-entered the picture (it’s like they have “she’s moved on” radar). My ex-boyfriend essentially proposed to me. And what did I do, you ask…

…I gave a quick “no,” more out of pride than actual certainty.

But, it shook me and it started to interfere with my new relationship–which happened to be a romance that I was certain could, if given the chance, lead to marriage. So I began to pray. And pray. And pray some more. And in the end, I really felt like the Lord was letting me make the decision.

I was flabbergasted and admittedly a little angry that the God of the Universe, who created atoms and the oceans, would leave it to little old me to choose my future spouse. I mean, who did He think I was?

Turns out, He didn’t just think, He knew, that I was His kid. I belonged to Him and, in belonging to Him, I was also following after Him and being led by the Spirit. So when two Godly, cool, wise, smart men stood before me, (I know, it’s a terrible problem to have) and I had to choose God knew that I would make a good choice because I was still in His will. It wouldn’t have been a sin for me to marry either of them. I was free to choose.

Many people I know have had similar experiences. There was no lighting flashes in the heavens. There was no target practice. It was simply God trusting His children to make a wise choice when a potential future spouse made their way onto the scene.

Of course that’s not to say that there aren’t practical steps you can take to help you make a wise decision. For starters:

Seek counsel. I did this, too. I asked a lot of people because I was so afraid of making a wrong choice. My friend said to me, “Nicole, no matter who you marry, once you’re married that is exactly who God wants you to be married to.” This gave me great peace. Also, God often places people in our lives who just down the road from us. They have great advice and insight to offer, so ask.

Crack open the Book. The Bible isn’t silent on the issue, but it doesn’t give explicit direction on this topic, either. However, that doesn’t mean the Lord can’t lead you to an answer through His living Word.

The best friend test. Is your BFF on board? This isn’t always a perfect measure of marriage worthiness, but it can help, especially if you really trust your buddy.

Pray. This is a given, of course. But I admit, that prayer is usually the last stop on my “What does God want me to do?” quest. Elizabeth Elliot has said, that if every believer stopped and prayed for two hours about their requests and needs, they would most certainly receive an answer from God. Two hours, that’s it.

Relax. Most people, when they find themselves about to say “Yes” to the dress, have a feeling in the pit of their stomach as to whether this is the real deal or not. Trust your instincts. Trust what God has told you. Trust the fact that if you are strolling with Jesus, chances are you will make a wise decision. Don’t look for signs in the sky. Don’t over-spiritualize the process, either. Let Him lead and simply follow.

Have you been stressed, concerned, or anxious about choosing a spouse? If you are married, how did the selection process go down for you? What’s your advice?