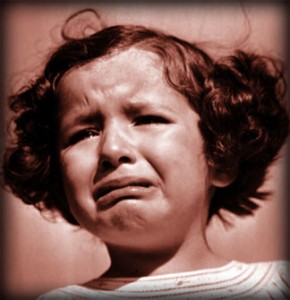 From the time they are born, little boys are told repeatedly to suppress their male nature. Young men are told to not hit their sisters, to not throw rocks, punch walls, nose-dive from on top of dressers. They are told to behave, and act like gentlemen, when in fact, acting like a man to a little boy is really all about how much testosterone he can expend in a given hour.

Little boys are repeatedly told to control themselves and to channel sexual aggression into other more “constructive” areas, like sports. While girls, on the there hand, are coddled and told that it’s okay to cry, it’s okay to feel (everything), it’s okay to be in touch with every emotion they experience. In the era following feminism, as well as a culture obsessed with the discussion of feelings, little girls have grown up to think nothing less.

Women begin to believe that crying is customary–that our ability to conjure up tears at the drop of a hat, for say a police officer who caught us speeding a mere 10 miles over the speed limit, is a secret weapon we can employ when necessary. We begin to believe that our emotions are not only acceptable, but womanly. Heck, we think being emotional is our right.

The problem, however, is that while men are being told to suppress their natural instincts, women are being told the opposite. But, should women control their emotions? On the one hand, men are taught to not give in, whereas women are often told, sure, give in whenever you want. Feel free to feel everything and then act emotionally.

To be clear, I’m not advocating that women should, in any way, become emotionless robots devoid of the essence that makes us women. What I am saying, however, is that the more women are taught to give into their emotions, the less happy they become. Letting one’s emotions run wild is not the path to emotional fulfillment. In fact, it might result in the opposite occurring: an unhappy life.

Consequently, the women many of these girls grew into lacked the ability to control their natures, to control their emotions, or their moods, and therefore lacked the facility to engage in the self-control necessary for happiness and the avoidance of depression.

When our emotions control us, we are very often unable to control anything else. We are tossed to and fro, from one passing emotion to another, never certain of where we might land. When women do not have control of their emotions, they are much more likely to find everyday situations cause for sadness. What a man could potentially reason his way out of, a woman sometimes easily succumbs to.

Men are rarely described as moody, for instance. I doubt many men sneak off at work to cry alone in a bathroom stall. But ask a woman if she has ever been called moody. Ask a woman if she has held back tears in her place of work. Most will say yes and on more than one occasion.

More than that, society rarely tolerates a hot-headed, quick-tempered man. We call him a jerk, but a weepy, emotional-roller-coaster-of-a-woman is usually not given a second thought. “Oh, she’s just a woman…”

I’m not saying that women lack critical thinking skills or that all women are emotional minefields. What I am saying though, is that more and more women have begun to view their decisions subjectively instead of objectively. They internalize everything, which often appears in an outward emotional display, whether appropriate or not, whether constructive or not.

Women, just like men, need to be taught from a young age that their inherent nature, which leans towards the emotional, is not always acceptable. Just as men must learn as boys, that their aggression and physical nature, must be directed towards more constructive areas. Woman have suffered a great deal for not learning to understand, and yet balance their own nature.

Emotions are a beautiful thing and so are women. We simply need to have a balance of the two.

Pssssst- If you like this post, you may be interested in checking out more Wednesday He Said/She Said topics, where I discuss all things related to men and women.

24 thoughts on “Should Women Control Their Emotions?”