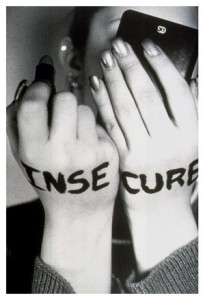 Today, I’m happy to have a guest post for you all from one of my favorite gentleman in the blogosphere, Darrell Vesterfelt. Darrell has appeared on Modern Reject before and I’m so excited to have him back. Enjoy.

I’m really insecure about my weight. I have been my whole life.

There are all kinds of reasons for that. I used to get teased in high school, to start — words so insulting I can’t even list them here. I don’t have the fastest metabolism, to make matters worse.

I have a difficult time staying at a “healthy” weight for my height.

The hardest part isn’t that I feel like I’m fat, although that’s difficult in and of itself. The hardest part is the way that people look at, and talk about, other people who are in my position. I’m not ignorant to it. I’ve thought the same things you think.

I’ve spent my whole life, and a lot of my energy, trying to prove that these things aren’t true about me.

You know what I’m talking about. You’ve done it too. The lies of insecurity run so deep that they have the ability to control our entire reality. If we aren’t careful, insecurity starts to dictate everything we think and do.

How does it do that? What is it that makes insecurity so powerful?

Insecurity lies to me about who I am.

Insecurity lies in the scariest way that something can lie. It takes the truth and it twists it until it isn’t true anymore. Do you realize that? Insecurity can take two different realities and bring them to the same wrong conclusion.

The first woman hears, “You’re fat. No matter what you do, you’ll never be good enough,” so she tries and tries to disprove her insecurity. She’ll avoid eating all day if she has to — until she has nearly starved herself to death.

The second woman hears, “You’re fat. No matter what you do, you’ll never be good enough,” so she gives up trying altogether, pretending it doesn’t matter to her anyway — binging, in private, to numb her pain.

The danger of insecurity isn’t just that it lies, it’s that it lies really loudly. Sometimes it seems like the lies of your insecurity are speaking louder than reality.

My insecurity doesn’t just tell me that I’m overweight, it tells me that there’s nothing that I can do about it, that I don’t have what it takes to change, and that the way I look dictates my value.

None of these things are true — but it’s amazing how easy it is to believe them.

It’s so easy to believe them, in fact, that it covers up what is true, which is that although I am overweight, I do have the power to change to the way I eat and the way I live, but that even if I don’t ever lose weight, I’m not lazy, ugly, or stupid.

My weight does not dictate my value.

When we let our insecurity speak to our value, we are not just believing a lie, we are worshiping that lie, by responding to it and living in it as if it were true, rather than choosing to live in reality of Jesus.

Insecurity begs us to protect ourselves, which is never helpful or constructive.

Maybe the worst part about insecurity is what it tells us to do, which is to protect ourselves from everyone and everything. Protection costs something, and nearly every time I try protecting myself it is at the expense of someone else.

Nearly every time it takes its dividends from my relationships.

I bet your insecurity tells you to do similar things.

We have insecurity, in part at least, because we were wronged. For me it was what kids said about me when I was in school, and the way they treated me. Maybe for you it was your relationship with a parent, or a boyfriend or girlfriend.

It’s a natural human response to respond to pain with protection.

But I have good news for you. You don’t have to choose a natural human response anymore. You have Jesus.  Ask him for the power to respond to your insecurity.

Insecurity has no power over you.

Did you know that? Your insecurity might seem strong. It might seem so strong that you think you can’t overcome it.

These behaviors might feel so powerful that you don’t think you can stop doing them. You might out-spend your budget on clothes each month, or obsess over what you’re wearing before you leave the house.

Trust me. You can.

As for me, I am changing. I refuse to allow the lie insecurity has been telling me my whole life to dictate my future.

What has made you feel insecure? What have you struggled to overcome in a particular area? How has God brought freedom to you?

Darrell is the president of Prodigal Magazine and church planter in West Palm Beach, Florida who believes in the power of stories to change the world. His life’s passion is to help people by tell their story so they can see and understand the truth of God at work in their lives.

12 thoughts on “Is Your Insecurity Causing You to Sin?”