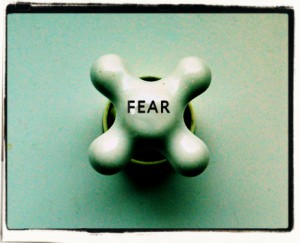 Okay, okay, I admit it. Christians aren’t suppose to be scared, right? We are supposed to walk around in our perfectly, not scared bodies, shielded by the super-powers of the Holy Spirit.

We are suppose to be like some kind of anti-fear force field–zapping things like phobias and anxieties with a wave of our hand.

But let’s be honest. Most of us aren’t fearless superheroes by any stretch of the imagination. I, for one, have plenty of fears and insecurities.

One fear in particular has always haunted me. It is my dark and looming cloud, my ever-present “what if”, my unavoidable reality.

My greatest fear in life…

I have long straddled the line between ordinary and exceptional. I am neither an overachiever or an underachiever. Instead, I’m the perfect combination of perfectionist meets procrastinator, go-getter meets getter-later.

I’d like to blame it on the fact that I am an only child. Us, only children, really do suffer when it comes to overall performance. Reason being, we don’t grow up with anyone to regularly compete against. I watch in wonder and irritation, as my 3 and 5 year old race to see who can put on their pajamas faster. The victor usually celebrates with some kind of flaunting-in-your-face-song and dance. Meanwhile, the loser can usually be seen crying in the corner of their bedroom.

I did not experience any of this in my childhood. It was just me and I determined rather quickly that mediocrity was the name of the game. I hung fast to the bumper sticker that reads: If you aim low, you will always hit your target.

And so it went…I aimed low. A lot. And wouldn’t you know, I almost always succeeded. God, though, in true God-fashion would have nothing to do with my embrace of mediocrity. He had other plans.

I was unknowingly propelled forward by the Lord into a new realm, a place I had never been before. It was called achievement and it was to be paired with a nice glass of perseverance and a side of patience. All three were delicacies I had heard of, but never actually tasted.

I know it is not God’s plan for me to spend my life being afraid of a mediocrity. Meanwhile for so much of it, that’s precisely what I had been doing.

Sure, I’m afraid of other things, like my children becoming ill or losing my husband in some kind of freak accident. These, I think, are normal fears and not ones that I obsess over. They come and go without much fanfare.

But my twin mediocrity and I, we go way back. I have had a much harder time shaking her off because instead of surfacing in one quick startling fearful moment, mediocrity has grown into a constant, unspoken presence, tainting all I put my hands on…and all that I don’t.

God, however, does not deal in mediocrity. He deals with us, who are perhaps normal, nothing special, ordinary. Yet, what He has for us, what He has prepared in advance for us, is so far from average. The question is, am I willing to come along…

…and I believe that I am. I believe that for the first time in my life, my fear of settling for good, is greater than my fear of living a mediocre life. I don’t want to miss what God has for me, uncertain or not, fearful at times, or not. Mediocrity can wait. I’ve got other plans.

What is your greatest fear? What holds you back from fulling embracing God’s plan for your life? How has God encouraged you to trust Him in this area?

22 thoughts on “My Greatest Fear”