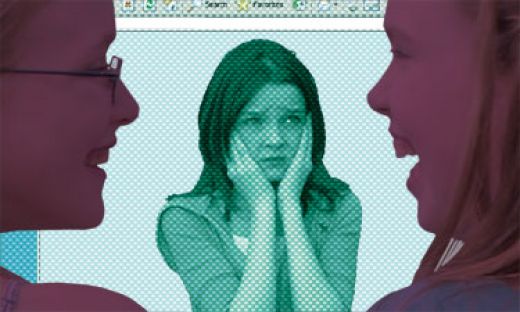 I suppose it was survival. A defense mechanism developed as the result of years and years of bullying.

Girls can be mean. Vicious, really. Cruel, even.

I never saw it happening or noticed the moment when I changed. It was a transformation just like anything. A process, that took me from being who I really was to someone I never wanted to be.

The girls you read about in teen novels and who play the villain in teen movies. That was me. I was no caricature, but I was the girl that exists at every high school. I was a product of my environment.

I was bullied and so eventually, I became a bully. I was a mean girl.

I wasn’t gruff or tough. I didn’t slam girls against lockers or shout obscenities at them, like had been done to me. No. I was a sort of undercover bully. A real mean girl,  sly and unsuspecting, coy and deceitful. I would smile to your face and tear you down behind your back.

I had perfected the art of polite conversation, head nodding, grinning and mmm-hmmm-ing. But, at the first chance I got, I would cut you down, find your flaw and hold onto it, shame you to my friends…without you ever knowing.

I was no better. I was a mean girl.

And it went on this way.

College wasn’t much different, even despite the fact that I knew Jesus by then. I remember actually picking a fight with a girl during freshman orientation. I tried to start a physical altercation. The thought now makes me ill, but at the time, it seemed normal…easy..acceptable.

Was I trying to impress my new friends? Was I bored? Was I acting out my own anger at this poor innocent girl who did absolutely nothing to deserve such aggression and anger?

Sure. Yes. All of the above.

Even then I was blind to what I was doing. I never thought twice.

And one day, while having coffee with an old friend, someone who I had long acted out as a mean girl along side, I heard God softly touch my Spirit.

It felt as if He was telling me something I had always known. It was not a surprise to me and yet, it was fully new.

I repeated the phrase out loud that God had spoken to me. My friend looked emotionless.

It’s not cool to be a mean girl.

That is what God said to me. How’s that for a little Jesus vernacular?

It’s not cool to be a mean girl.

My friend had no response and went on sipping her non-fat latte. And I sipped my cappuccino and felt a rush of gratitude for suddenly, in one instant, without asking, being set free from such sin and harm.

Oh, and my heart weeps knowing I cannot go back and apologize to every girl that I ever made to feel small, or helpless, or worthless, or ugly. I cannot erase what has been done…

…but, God can. And I pray that He does and He will. I pray that my being a mean girl will have no lasting impact on a single person I have known, that my freedom may be their freedom, my hope their hope.

Might someone love them on my behalf with outrageous, selfless, wild love. Lord knows I would, if I could.

It’s not cool to be a mean girl. It never was.

24 thoughts on “Confessions of a Mean Girl”