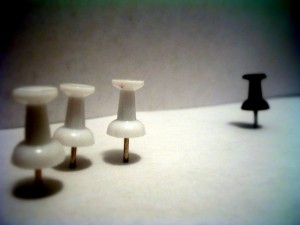 I can’t count the number of times I have heard a Christian say something along the lines of, “Well, sin is sin. God sees all sin the same.”

Really? Does He, really? God sees all sin the same?

Do you believe that? Because, I, for one, have a hard time believing that someone stealing a candy bar is the equivalent of murdering an innocent person, in God’s eyes.

The arguement that the two are identical in their weight and nature, “sin is sin,” flies in the face of God’s character. Nowhere in scripture do we see God acting this out. If anything, we see the opposite.

Jesus actually gives us quite a few references to degrees of sin. The following two passages refer specifically to a greater degree of punishment:

Matthew 23:13 reads, “Woe to you, scribes and Pharisees, hypocrites, because you devour widows’ houses, and for a pretense you make long prayers; therefore you will receive greater condemnation…”

And Luke 12:47-48, “That slave who knew his master’s will and did not get ready or act in accord with his will, will receive many lashes, but the one who did not know it, and committed deeds worthy of a flogging, will receive but few. From everyone who has been given much, much will be required; and to whom they entrusted much, of him they will ask all the more.”

The following verse from John 19:11 actually refers to a greater sin:”…for this reason he who delivered Me to you has the greater sin.” Jesus clearly tells us that Judas’ betrayal was a greater sin than that of Pontus Pilate.

But, let’s set aside those verses for a moment and just consider the fact that God is a Father. Any parent knows that their children must receive consequences appropriate to their actions. I like to refer to them as “practical consequences.”

For instance, if my daughter complains or grumbles about the dinner I serve, she doesn’t get to eat it (does that sound harsh? Kinda sorta, I admit). She learned quickly, however, to say “Thank you” when that plate of meatloaf is placed in front of her.

Likewise, God deals with us similarly. He gives us practical consequences for our missteps. He doesn’t blindly dole out punishment or treat all of our sins as equal. More than that, He deals with us individually and personally. Again, any parent with two or more kids knows that their kids are very different from one another…and must be dealt with as such.

But, in all of this, I’m reminded that I have not received what I deserve. The grace of the Lord abounds…and abounds. While I believe there are degrees of sin, I also know that, in my own life, I was once guilty of death. Yet, my Jesus has called me His–redeemed, restored, reconciled. Forgiven.

I need only ask for forgiveness when I stumble, turn, and run straight towards Him once again.

So, what do you think? Agree or disagree? Have you ever said or thought “all sin is the same,” or “sin is just sin”? Why do you think this mindset is so pervasive in the church?

41 thoughts on “Are There Degrees of Sin?”