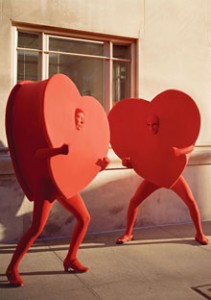 Look, I’m gonna be honest and please don’t hate me, but Jonathan and I rarely fight. I think I can count on one hand the number of times we have really “fought,” and that is simply amazing for over 7 years of marriage.

So, now that I sound like the biggest marriage-bragger-snob-lady-ever, let me also say that I know that we are a rarity and more often than not, most couples argue on occasion. And sometimes, just sometimes, a good fight is necessary in marriage.

I also admit, that when Jonathan and I do have a battle royale, we have rules. That’s right. There are rules of engagement, which have become the parameters for our “fighting.”

Rules for fighting help, and can prevent scuffles from turning into winner-takes-all-death-matches. Here’s how we fight. First up…

1. No screaming, yelling, or biting. Okay, the biting goes without saying. It should anyway. But, if you’re like me and your first instinct to is to get loud then take heed. Screaming elevates. That’s it. It doesn’t make your point more clear. It doesn’t win. It doesn’t even tie. It escalates the situation and it looks ugly. And if like me, that’s all well and good, but you still need help, read on…

2. No name calling. When in a wedded war, you are never, ever, allowed to call your spouse a name. Ever. Unless it is “sugar,” or “sugar-daddy,” or “sugar bear.” You get the idea–something sweet.

3. You cannot judge intentions. This was introduced to me by my husband. When he was growing up, his parents instructed him and his brother that they could never judge intentions. Example: “You meant to knock over my Lego tower of awesomeness!” Nope. Can’t do it. We can only judge actions. I can say to Jon, “My feelings were hurt when you didn’t call me.” But NEVER: “You meant to hurt my feelings by not calling.” Speak to actions, not intentions. So huge!

4. Pray. There is some crazy statistic (that I heard once but could never find again) that 80% of conversations will end on the same note in which they began. So, if we can (assuming the hot-blooded, passionate, loud-mouthed wife hasn’t hijacked the fight) we start our argument/disagreement with prayer. It sets the tone and makes all the difference.

5. Pray again. Oh, and finish up that bad-boy with some prayer too. Sandwich effect. Never hurts, only helps.

6. Touch each other. I really, really, really dislike this one, but holy bananas does it work. ‘Cause when I’m ticked, the last thing I want is to snuggle. But, when you are touching each other–holding hands or placing a hand on a knee–it is really, really, really difficult to stay mad. Your level of hostility or frustration immediately decreases. We picked up this little gem in pre-marriage prep class. You’re welcome.

7. No “record of wrongs” allowed. Remember in 1Corinthians 13 where Paul talks about love and says that “[love] keeps no record of wrongs.” Be fair and honoring in this. Don’t bring up old offenses or past hurts. Stay on topic and really let go of the past.

8. Listen. Don’t be the guy (or chick) who, in their mind, is simply running through their own response and preparing a retort–thereby ignoring everything your wonderful spouse s telling you. Just listen.

Okay, so that’s what I got. Let me say too, that when Jonathan and I are quick to follow and stick to these “rules” our arguments are diffused much easier and faster than were we too go to fisticuffs on our own.

What would you add to the list? How do you fight? Fair, meekly, loudly, often, infrequently? Any advice?

18 thoughts on “How to Fight in Marriage”