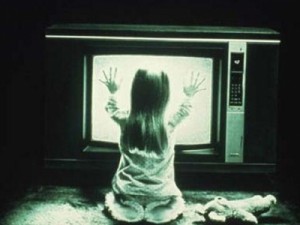 I really like to be scared. Since I can remember, I have had a strange love affair with horror movies. I remember watching Alien for the first time, hiding under my mom’s covers, peeking out with just one eye (my mom told me not to watch).

I remember seeing the Howling at a friends house and being terrified and completely riveted as a man morphed into a werewolf in the bloodiest, gooiest, and icky-est of transformations.

And I remember convincing my mom, at the age of 11, that I was old enough and brave enough to watch Stephen King’s It. She agreed, but with one requirement: I had to watch it alone, in the dark. She was trying to teach me a lesson. Well, lesson failed…except that I was afraid to brush my teeth for a week, for fear that an evil clown hand would come up through the drain and grab me.

Since I like being scared, for many years Halloween was the perfect time to be freaked out! But alas, I have little kids now. They are easily frightened. I cannot dress up as a tormented zombie or a dead bride any more {sigh}. I have to be -responsible.

But that doesn’t mean I can’t sneak in the occasional horror flick from time to time. Or enjoy seeing and hearing about other people’s fright nights. Here are some images of just what Halloween is all about to me–the costumes, the good scares, and of course, the candy. Enjoy…

Ever heard of the Nightmare Fear Factory in Niagara Falls? Well, apparently it is one of the scariest haunted houses around. But what makes it really awesome, is the fact that they snap photos of people at their most frightened moments. The resulting pictures are some of the funniest things I’ve ever seen. I actually cried, I was laughing so hard.

What I really love, what really makes me smile, is kids tricked out in Halloween costumes that aren’t your standard issue. The creativity, the surprise, the hilarity of some kids costumes makes it all worth it. This guy had a childhood full of some of the greatest kid costumes ever. One in particular had me rolling. Can you guess which one?

Finally, candy and a sweet little boy named Evan, trying his first ever Warhead. His reaction is priceless:

What are your plans for Halloween? Do you celebrate or not? When were you the most “good scared” in your life?

9 thoughts on “Be Afraid, Be Very Afraid…”