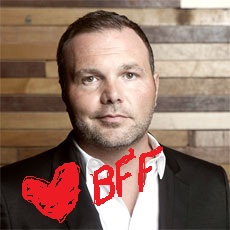 In general, I like to avoid writing about divisive people. I find no joy or profit to be had in writing about someone with whom I theologically or fundamentally disagree. I don’t like to pick fights, as it were. And, as I’ve said before, I never want to stir up controversy for controversy’s sake (despite what some might believe).

But recent events have driven me to take notice. What I once shrugged off as Christian banter, I now recognize as something much more. I now know that Mark Driscoll has a lot of enemies, those who would desire to see him fail, be fired, or worse. And well, I just wanted to let Mark Driscoll know that he is my new best friend. You see…

I’ve begun to grow increasingly tired of all of the Driscoll bashing, hating, belittling, and finger-pointing. It seems as though every time I set out to read a blog or scan my feeds, there appears yet another target on Driscoll’s back.

Matthew Paul Turner, on his blog Jesus Needs New PR, recently published a two-part blog series describing an incident which MPT used to illustrate Driscoll and Mars Hill as “abusive,” which led others to call the church “cult-like.” Author and blogger Rachel Held Evans wrote a post titled Mark Driscoll is a Bully, in which she decried his inappropriate behavior and defamatory language towards homosexuals. In all fairness, I am not picking on these two bloggers, either. They are simply examples of the type of rhetoric surrounding Driscoll.

To be clear, I do not advocate Driscoll’s actions in verbally attacking men he may find effeminate. Nor do I condone church abuse in any way, obviously (though I wouldn’t refer to discipline as abuse, either).

But most of all, what I don’t support, what I cannot tolerate, is the ongoing attack of another believer.

What if Mark was your own pastor? Suppose, just for a moment, that the pastor of your church had an moment of…let’s call it…poor judgment? Say your pastor made an inflammatory, sexist remark to a member–or members–of the congregation. How might you handle this situation? What if you were personally offended or, worse yet, the hurtful comment was directed at you?

Now, I know some will argue that Driscoll’s behavior is not merely poor judgement, nor has it been only one instance. Still, I ask you to consider how you would handle the issue of your own pastor taking a similar misstep. Perhaps even imagine your pastor has had more than one instance of questionable character.

And what if someone, outside your local church, began verbally attacking your pastor, having never met him nor set foot inside his church?

Oh, I know what critics will say. We are the church. Us believers. So, as the church, we have the moral, spiritual, and Biblical authority to judge and rebuke those within the church (1 Corinthians 5:12-13), especially those in leadership (James 3:1).

Really? Because based on scripture, I don’t see any accounts of people outside of a particular church body making any such claims. Paul wrote to many different churches offering admonishment, rebuke, and correction when needed. Yet, we know that he did so having intimate knowledge of those church bodies himself.

Being a part of the Body of Christ does not give us a free pass to pass judgement on just anyone in the church as we see fit.

What I find most distressing, however, over the recent and growing onslaught of articles and posts about Driscoll is not so much that people don’t like him. I get it. He’s maybe a little arrogant, machismo, controversial, even a bit sexist. What I find more alarming is how quick those in the church at large have been to bash him.

There seems to be a spirit of attack growing within the Christian culture. We feel that because we are a member of the body, we have free reign to say it like it is, place blame, point fingers. Again and again. And it’s not just Driscoll. Anyone in the public light is open to our ongoing criticism and critique.

And how much are we to blame for these so-called superstar pastors? We elevate and idolize the mega pastors–the Rob Bells, John McAurthurs, and Rick Warrens of the world. Yet, they aren’t celebrities and they aren’t superheroes. They are ordinary men, doing God’s work.

And if I remember correctly, the Bible says that others will recognize us by our critique of others. Or wait, was it, we will be known by our judgement of one another? No, that’s not right either.

Of course, some might argue that Driscoll using terms like “limp-wristed,” in regards to men, isn’t exactly being loving himself. True. But do his sometimes offhanded, even insensitive statements give us permission to respond in a spirit of attack?

Does one sin excuse another? Does sin beget sin? Aren’t we essentially saying that bad behavior warrants us to respond with more bad behavior? Because that is what those outside of the church will see.

If you think that unbelievers will only notice Driscoll’s response and not our own, you are sadly mistaken. People will–and do–see so-called Christians attacking another Christian and know it’s not in love.

What’s more, Jesus reserved His harshest and most damning rebuke for those who were hellbent on seeing Him slip up. You see, the Sadducees and Pharisees didn’t just dislike Jesus from afar. They were actively trying to trip Him up. They twisted His actions and words to suit their own purposes–the purpose of exposing Him as a fraud. It was the ultimate game of “Gotcha!”

And how different are we? The members of our body sit on the sidelines, watching and waiting for the Mark Driscolls, Rob Bells, and other superstar pastors of the world to slip up. Because it’s really fun to pull someone down. Definitely more fun than building someone up, right?

Granted, I’ll be the first to admit that I don’t know what the right response should be to an individual like Driscoll. I don’t prefer much of what he says, but I also recognize that he still has a powerful ministry that is preaching the name of Jesus Christ. The Jesus I love and follow. The Jesus that is supposed to be our singular and defining thread as believers. Mark and I are members of the same body. He’s my brother. He is my bff.

And at the end of the day, that is really what I care about. Jesus Christ. Some might say he gives Jesus a bad name. I say the collective response of others towards Driscoll isn’t giving Jesus a much better name.

Bloggers, tweeters, and Facebookers are really good at mouthing off. It is almost a requirement for this social media age–getting it out there, saying what “needs” to be said, informing the masses. But if Jesus were sitting right next to me, looking at my computer screen, what would I really want to write about this–or any other brother–in Christ?

We shall be known by our love, not our judgement or critique of one another. Our love, not our ability to trip one another up or make assumptions. Our love, not our righteous anger or condemnation. We cannot judge a man’s intentions, motives, or heart. God can…and does. Our response is to be in love, seasoned with truth and grace. It cannot be one or the other. It has to be both.

How do you feel about the articles and posts written about Driscoll? Do you feel there is a spirit of attack within Christian culture? What do you think is the right response to church leaders?

82 thoughts on “Mark Driscoll is My New Best Friend”