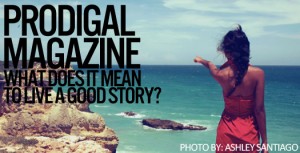 Today’s post is part of a blog series sponsored by Prodigal Magazine, which seeks to answer the question: What Does it Mean to Live a Good Story? I’m honored to take part and hope that you will visit some of the other talented and gifted bloggers participating, as well.

I suppose I wasn’t very different from most other teenagers I knew. I wasn’t concerned with being good, so much as fitting in, which showed itself in my willingness to drink alcohol, smoke cigarettes, and have sex with my boyfriend. I never felt good about these choices, but they brought me happiness…or rather, acceptance.

Like any 16 year-old, I was consumed with myself. Teenagers are notoriously self-centered and I was no exception. My story was all about me. The story I lived to share, and longed to share, was my own. If my life was a movie (and what 16 year old doesn’t on some level believe their life actually is a movie), I was the star. It was my name I desired to see up in lights.

Forget Angelina, Charlize, Reese. I was the main character of my own film. It was a blockbuster, written by, directed by, and starring me.

I remember how the need for attention would swell up inside of me. I remember how I would position myself, negotiate situations so that I might fall into the limelight. I loved the feeling of walking into a room and people taking notice. Looking back, I’m ashamed to admit that I lived for that kind of adoration.

But, one month shy of my 17th birthday, I met the Man who would begin to tell me an entirely different story. His story had a dramatic change in plot, a different beginning, and all together new ending. Most importantly, this story had a new main character. This story was radical, life-giving, and transforming.

Suddenly, I felt the responsibility of telling His story, not my own. In God’s grace, He also allowed me to take a small part in His magnificent story. I could share my past, my present, my hopes and vision for the future in such a way that I really told Jesus’ story above all.

Isn’t this what was meant to be? Isn’t it that much more fulfilling to tell the story of Christ, before we fight to tell our own?

It was Francis Chan, in his ever-wise and practical way, who first placed the movie analogy before me. In Chan’s book, Crazy Love, he writes:

“From start to finish, this movie is obviously abut God. He is the main character. How is it possible that we live as though it is about us? Our scenes in the movie, our brief lives, fall somewhere between the time Jesus ascends into heaven [Acts] and when we will all worship God on His throne in heaven [Revelation].”

So there it is, a truth we may know, yet often forget–that this story isn’t about us, but rather it is about the Risen Messiah. He is the Star. I was not. You are not. Despite this being a counter-cultural message, I found it freeing.

The world wants to tell us that we are the only ones that matter. We are the heroes of our own stories. But nothing could be further from the truth. Living a good story means telling His…again and again and again. It means telling His story with our very lives–not as the main actor, but as those in a supporting role whose entire job is simply to help the True Star of the film shine.

As Chan also says, “The point of your life is to point to Him.” So, I ask you, do you have any good news to share? Do you know of a story so true, so rich, so simple, and so beyond comprehension that it offers the power to save and bring abundant life? If you know that story, speak up. If you’ve seen that movie star, shine the light on Him. Because His is a movie worth seeing. Because His is the only story worth sharing with everyone.

What story are you seeking to tell, His or your own? How have you allowed God to be the main star in the movie of life? How can we best tell others His story?