My husband and I have long discussed whether or not Jesus was a funny man. You know, not funny “ha ha” but other kinds of funny. Was he jovial, a jokster, a goof?

Did He like to play pranks on His disciples? Is that really what He was doing when He said John was His fave?

My husband imagines Jesus sitting around a fire late at night, shootin’ the breeze with His disciples. In Jonathan’s imagination, there had to have been some jokes cracked and some gas passed. I mean, there were dudes. Jesus had to laugh at farts and fart jokes because, well, almost all men do, right?

Just last night we were talking about this–Jesus being funny or not–and a few minutes later, I decided to hop over and visit Ragamuffin Soul for some reason. Lo and behold, I saw an image that some would call sacrilegious and others would call downright awesome. A picture like this only comes along once. I saw it and I smiled… 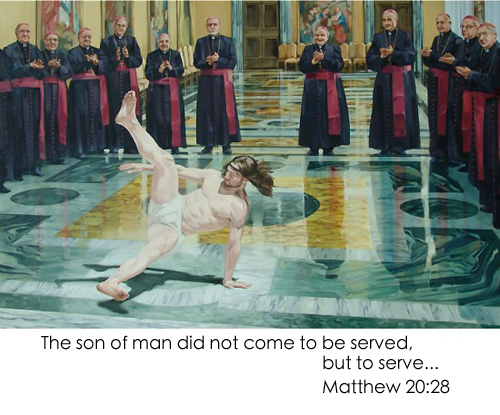 Now, I didn’t smile because I think it’s particularly fuuny. I smiled because I’m pretty sure God was directing me to that blog, in that moment, to see this picture.

I love what Carlos wrote about “Breakdancing Jesus” and while I don’t fully agree, it got me thinking. He said, “I’ve learned a few things about the personality of Jesus. He was a whimsical man with an amazing sense of humor. He wasn’t this boring, serious, drab man. No group of obnoxious and loud fisherman would have dropped their nets and followed that man. I think He laughs at playful teasing of Himself and dished it out as well.”

I wonder. Was Jesus light-hearted? Was He “whimsical,” as Carlos describes? How could He be? He knew, in some sense, what lay before Him. Scripture describes Jesus as “despised and rejected by men; a man of sorrows, and acquainted with grief.” Another translation says He was “familiar with suffering.”

Did He really have time for jokes?

…I imagine He had to. Jesus had to laugh about something. Anything.

His heart had to be distracted from the present pain and the pain to come. He was human after all and as cliche as it might be, nothing makes us humans feel better like a little laughter.

And what about this breakdancing Jesus? Do you think the Lord sees it and laughs? Does He care? Is it sacrilegious or despicable? I for one, don’t like pictures like this–or T-shirts, or bumper sticker, or keychains. I think they demean my God. I think making Jesus a punchline is never a good idea…but that doesn’t mean God can’t laugh at us all the same.

What do you think about this picture? Sacrilege or hilarious? Do you think Jesus was a funny guy or not? How do you imagine Him? Tell me! I’m dying to know!