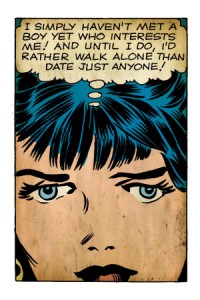 I did not grow up in the Church. I mean, I went to church occasionally, but I was not surrounded by a community of believers. I was, therefore, not exposed to the Christian phenomena of the “Proverbs 31 woman” until much later.

It seems that, for many young Christian women, the ideal placed before them is a woman who looks like this: She is Godly, yes, but perhaps more importantly she is married, with 3.4 children, stays home to tend to the needs of her family, and bakes loaves of bread and apple pies for kicks.

This is a nice picture–a lovely one, in fact–but is this God’s only picture of a Jesus-loving woman? Can a Christian woman be seen as Godly without having children or without <gasp!> being married? Is the single Christian woman blessed or doomed?

There are quite a few singleton women in the Bible. It’s enough having to defend the position that Christ was, in fact, a feminist in a very real sense of the word. He loved (and loves) women, I am convinced.

One thing is clear, however: women are not men and often serve very different roles, as a result. Many of the most notable single women in scripture were the women who helped fund and support Christ’s very own ministry. There are also a few women recognized for helping to support Paul and the early Church movement in The Book of Acts. Here is a pretty good list, if you’re interested.

Take, for example, the rather famous Mary Magdalene. She is mentioned in Matthew 27, Mark 16, and John 19, among a few other references. It is believed that she was the woman from whom Jesus cast out demons. She then became a devoted Christ-follower and began financially supporting His ministry.

However, the key piece of information about Mary Magdalene, in my opinion, was the fact that she was the first person Christ revealed Himself to following His resurrection. He could have shown Himself to Peter, or James, or John, but He didn’t. He chose Mary.

He gave her an exceedingly important task: entrusting her with the message that the Messiah was indeed risen! I don’t think this can be overstated. Christ chose a single woman, unmarried, who had no children (that we know of) to tell His disciples that would forever revolutionize the world–Jesus had risen!

The reality is, God does value family and marriage, but nowhere in scripture does He make it a command to marry (except to the rare few like Hosea). On the flip side, we also know from the Apostle Paul that, at least in his opinion (which, um, ain’t a bad opinion), the single life affords individuals many more opportunities to serve Christ.

Christian women are taught to idealize and admire the Proverbs 31 woman and, hey, I get it. She is pretty awesome. She is not, however, the only example of a Godly woman in the Bible. A single Christian woman can have just as much impact in God’s Kingdom. We don’t view single Christian men as less-than, so why do we sometimes treat our sisters as such?

Likewise, women can marry and choose to not have children. I know in some circles this idea is sacrilegious, but again, while children are seen as a blessing in scripture, they are not a command or requirement. You can be a “good Christian wife” and not have children. You are not doomed.

Instead, we should be offering our sisters grace, not condemnation, for choosing to be single or choosing to not have children. We should have a right understanding of scripture, too, knowing that marriage is not the ultimate goal, nor children the ultimate prize. A life devoted unto Christ, loving Him and loving others–that is the prize–Him and Him alone.

Today’s post was inspired by the comments from last week’s Questions for God (yup, you Kristin). You can read them here.

87 thoughts on “The Single Christian Woman: Blessed or Doomed?”