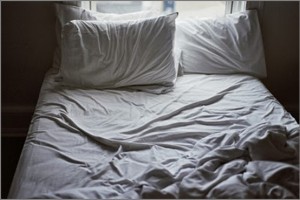 Over the last year, I’ve had numerous husbands email me and share with me their heartbreaking, if not tragic, sex life stories. They explain how their wives, who were once willing to engage in sex 2-3 times a week have now become completely closed off, never wanting any type of physical interaction.

Some of these confessions are so raw, wounds so gaping, that I cry as I read them. Some are so personal and candid that I cannot read on and I pass them along to my husband and ask that he be the one to respond.

But, in all, I’m left feeling the sadness of their stories weigh upon my heart. How is it that two people who once felt the hope and promise of love–including sexual love– now live a sexless, passionless existence?

How do you get from one to the other? From a well-spring to a dried-up well? From a spiritual joining to an almost systematic dividing?

Of course, it is not just men who have written me expressing their pain and loss. Women write too (albeit far less) and share about their husbands lack of a sex drive, his disinterest in them physically, his addiction to pornography, or his excuses about being “too tired.”

This is what I want to say, whether it is popular or not because I’m preoccupied with truth–not popularity: A sexless marriage is a sin. And, it seems, many of us are sinning.

Now, allow me to insert my (obvious, but seemingly necessary) caveat here. Yes, I know that not all marriages are the same. I know that some people suffer from physical, emotional, medical, and other such conditions that prevent or at least hinder them from enjoying or participating in sex. I know that abuse, trauma, and the like can have longlasting and not easily healed effects on individuals and their sex life.

However, when I reference sexless marriages, I am assuming that (more or less) all things are equal–being that two semi-healthy, loving and in-love people got married and once enjoyed sex together. Until somewhere along the way, sex became less frequent, and less frequent, until finally it was non-existent.

I posed a question on Facebook yesterday asking readers how imporant sex was in marriage? Almost all, said sex is extremely important and they each listed various reasons why they believed this.

The Reality of Sex

Women become uncomfortable when they hear things like men need sex two times a week, not want, but need. I feel the same way. I don’t want to think of sex quantitatively. I don’t want to be made to feel like I am meeting a quota. I want romance, foreplay, passion, spontaneity. But, in the real world of childrearing, deadlines, long hours, business meetings, ministry, and the rest, movie sex is not always an option. Nor should it be.

Our sex lives, within marriage, have to come back down to reality. We have to recognize that there is something to be said for the comfortable and the familiar, without losing a desire for the passionate and the explosive (yeah, I said explosive. THAT kind of sex!)

So, again when I hear of marriages where the marriage bed has literally dried up, I want to weep–not just for what has been lost, but for what could be. God does not desire marriages to be sexless. In fact, His word commands that they be the opposite (1 Corinthians 7:5) Sex should be offered freely and in love, not as a perfunctory act, but as a gift–one that is enjoyed by both spouses and brings glory to God.

Your Own Marriage Bed

If you are in a sexless or close-to-sexless marriage, I want to ask you why? What has taken place that has allowed your marriage to be robbed of the beautiful gift of sex? And are you going to do something about it?

I have personally struggled with past sin and the way that it has affected my marriage bed. Over the years, the Lord has brought various levels of healing–some supernatural and instantaneous–others through great sacrifice and pain. But what I now know and am now confident of, is that our Lord in Heaven desires nothing less for you than a pleasing, fulfilling, exciting, passionate, enjoyable, satisfying, freeing, and pleasurable sex life.

Do you know that? Do you believe that?

Because for so long, I didn’t. For so long, I thought my past sin would determine my future and God told me “No.” My freedom in Christ is available here and now–the same as it is for you. It’s not a promise yet to come, but a gift you can open today.

If you find yourself saying “no” to sex more than “yes,” then I would urge you to discover why. The answer may be painful, dark, buried, and even scary but God wants to bring Light to that place. Witholding sex from our spouse for long periods of time is not Biblical and in my estimation is sinful. It is harmful to us physically, emotionally, and spiritually and cannot and should not continue.

So, if you are not experiencing the sex life you know is possible, please pray that the Lord would show you why. Please seek Him and ask that He bring healing where it is needed and freedom where it is lacking. And know this, I am praying alongside of you. Because sex is a gift to be enjoyed, not to watch quietly die.

Please feel free to be as candid or as reserved as you like…How is your married sex life? Is it satisfying? Do you wish some things could change? How will you go about inviting God into that area so that He can bring new life?

231 thoughts on “The Sin of a Sexless Marriage”