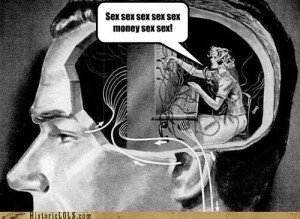 Happy He Said/She Said day. What do men want? I know what you might be thinking. I certainly would have said the same thing only a few short years ago.

We all know the quips about what men want. They only want one thing, we hear: sex. Television, the movies, and popular culture seem to consistently and and carelessly confirm this theory.

We are told sex is the driving force behind men. The reason they chase women and the reason they want women. I agree, men like sex. They even need sex, but is sex alone what men want?

While I believe men are simple, that does not mean they are ignoramus, ape-like, sex-crazed beasts. So, if they don’t just want (or only want) sex, what do men really want?

The ever-wise Dennis Prager, who I refer to often, has his own theory. I think it is one worth considering. He believes that men want to be admired by the woman they love.

My husband was uncertain of this explanation. He thinks it is a little too simplistic and doesn’t describe every man. Well, of course not. No one explanation of what men want will, but again, I think it is a fair assessment and here’s why:

Admiration, does not simply mean “respect”. The Bible tells wives to respect their husbands. Respect, then, in a marriage–at least according to the wisdom of God–is necessary, if not crucial.

While my husband desires I respect him, that alone is not enough. He also desires that I adore him and basically think he is the greatest thing on planet earth. Admiration entails respect, as well as esteem, and a bit of marvel.

My husband wants to know: Do I brag about him? Yes. Do I praise him in public? Yes. Do I think he hung the moon, as they say? Yes and Yes.

I can certainly think of a few boys on the playground who did some astonishingly stupid things, just to gain my attention. When males are young, they do not know that it is admiration they are seeking. Heck, I think many grown men do not even recognize this fact.

Instead, they often confuse their want of sex and sexual desire with the greater need for admiration. Sex, as much as men want and need it, is a byproduct of a woman’s admiration. Prager puts it this way:

“…it isn’t sex men most want from their woman. They want to be admired — and sex is one manifestation of a woman’s admiration for her man. When a man is regularly denied sex, in his eyes that means that his wife does not hold him in high esteem. Worse, he actually feels humiliated as a man. That, not the sex per se, is why regular denial devastates a man.”

I agree completely, as I have written about before. If a man is to feel admired, he must also be receiving sexual fulfillment from the woman he loves.

So, while sex will always be a motivating force for men, it is not enough to say “sex is what men need.” There is more to men than that.

What do you think? There is no right or wrong answer. What do you think men need? And next week, I’ll be discussing what women need, which is tied to man’s need, as well.