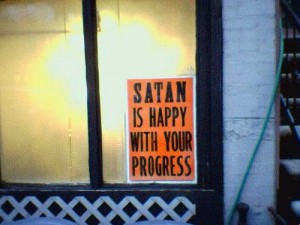 When I was a child, I was given a Bible filled with the most detailed and elaborate illustrations.

The one that most fascinated me was the drawing of Lucifer. His darkened wings spanning wide to display his might and power. He was beautiful, captivating really. Other angels cowered before him in the picture, yet the background showed darkness drawing near.

The illustration had such a mesmerizing and yet ominous feeling and even then, at the age of perhaps 6, I knew he was real. I had no doubt, some 10 years before accepting Jesus, that this Satan fellow was a real person. So why can a 6 year old believe and yet many in the church refuse to acknowledge Satan’s existence and power?

The disappearance of Satan has been a long and slow process within the church. According to the Barna Group “four out of ten Christians (40%) strongly agreed that Satan is not a living being but is a symbol of evil.”

Strangely, however, a “majority of Christians believe that a person can be under the influence of spiritual forces, such as demons or evil spirits. Two out of three Christians agreed that such influence is real.”

These statistics beg the question too: Why do the majority of Christians believe that spiritual forces, demonic and otherwise are real, but the same people are quick to dismiss Satan as real?

I blame Hollywood, in part.

In Christianity Today, George Barna, founder of the Barna Group explains it this way,

“Hollywood has made evil accessible and tame, making Satan and demons less worrisome than the Bible suggests they really are,” he said. “It’s hard for achievement-driven, self-reliant, independent people to believe that their lives can be impacted by unseen forces.”

It seems that on the one hand, most Christians are willing to acknowledge some type of spiritual influence, but they are not willing to put a name to the face and call it “Satan.” They fear naming their enemy because it gives him control and makes the abstract become tangible.

As Barna points out, the concept of evil, due in part thanks to Hollywood, has become a less-threatening idea. Satan has become a punch-line–Elizabeth Hurley in a leather bodysuit granting three wishes.

At the same time, while Satan is seen as a myth or the boogie man, Christians do cite spiritual influences to explain that which we can’t explain. We feel more comfortable calling the series of unexplained negative events in our life “spiritual influence” than “Satan.”

Of course, I would argue that Hollywood alone is not responsible for the disappearance of Satan. The church is also to blame. Sadly, the concept of our adversary whom seeks to devour us, is a long lost concept, rarely preached form the pulpit or taught to new believers.

Instead of being reminded that Satan is seeking to “steal, kill and destroy,” we hear very little about the person who tempted Jesus in the desert.

I’m of course not advocating a bunch of scared Christians running for the hills, hiding from the devil. He has already been defeated, but his influence and power is still upon the earth now. The Bible calls him “the ruler of this world.” We cannot read those words and then casually dismiss him as a fable or imaginary friend.

He’s counting on that. That makes him smile. To quote a great movie, The Usual Suspects: “The greatest trick the Devil ever pulled was convincing the world he didn’t exist.”

What do you think about Satan? Do you believe in him and his influence on the earth? Why or why not? Why do you think the majority of Christians no longer believe in Satan?

Bonus Question: Who has played the best Satan?

33 thoughts on “The Disappearance of Satan”