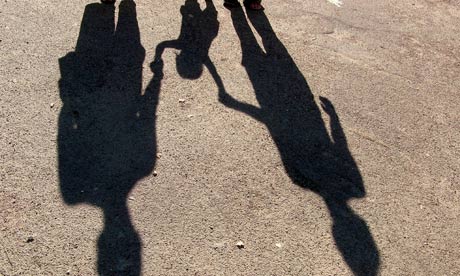 As a young Christian, I could never quite understand it. I looked around the other believers I knew and could find no common denominator for why some continued walking with Jesus and others did not.

But, after having walked away from God myself for three years, I now know that it isn’t as difficult as we would like to believe. But, now I am a mom raising children of my own. Unlike me, they will be raised in a “Christian home.” (That phrase makes me cringe. It’s almost like a spiritual death sentence for a lot of kids.)

I can see them now…sitting around a circle with other Christians, sharing their testimony of drug and alcohol abuse, promiscuity, and the like. They begin with “I was raised in a Christian home.” [insert Jaws music here]. Often times, it’s as if a “Christian home” is the precursor to a life of rebellion and heartache.

Now, as mother myself, I wonder what it is that makes some kids grow up to be Jesus-loving ninjas and leads others to abandon the values of their parents altogether? How do you raise a child who will always chase after God?

I heard good ol’ Beth Moore teach once on the verse, “Train up a child in the way he should go; even when he is old he will not depart from it.” Man, do us parents get that one wrong. I have heard Christian moms quote this verse a million times, always in an attempt to comfort themselves or another mom whose kid has gone off the deep end.

We have heard this verse twisted to mean, “If you raise a Christian kid, they will always be a Christian.” The end. And they all lived happily after.

What that verse really means is that, as parents, we are responsible in finding and directing our children to pursue the things that they are good at, encouraging them in those pursuits, and in doing so, seeing them enjoy those same passions as adults.

“Training” our children, as the verse says, includes training them in godliness. It means discipling them. The “way he should go” portion, however, refers to a child’s natural bent, his talents, disposition, character, etc.

So, where does that leave parents who want to help raise children who will, above all else, love God and love others?

My husband and I sat down my in-laws and asked them the same question. Is there some magic formula to guaranteeing Godly grown children (as both of their grown sons love God)?

They told us there was, of course, no formula, but there were two things that they had personally observed that potentially inhibited children from growing up to love God.

1. Legalism. In their observattions over the years, the families they witnesed who had a more legalistic bent often produced children less likely to be Christ-followers as adults.

2. God wasn’t real. Now, this idea is a bit more gray because “making God real” to our kids is a unique, personal, and daily challenge for any parent. However, my in-laws observed that the less God was made real in a home, meaning the more He was just an idea and not made to be seen as living and active, the more likely those kids were to fall away.

I have no fear of legalism in my household. Perhaps that is naive to say, but I simply don’t. However, I grapple daily with how to make God come alive for my kids–for Jesus to be in and among us and for them to know it. Not just think it, but know it. For them to feel Him, alive and present.

“Not the very best training of the very wisest parents in the world can positively secure goodness and wisdom in their children….Therefore, Let all parents seek, beside training their children in good habits, to win their hearts to that Divine Wisdom in whose friendship and service alone will they be safe.”

We have no guarantee that our children will grow up to love Jesus. We do, however, have years to tell them and show them, of His awesomeness, His grace, and His love…and then trust Him with the rest.

Were you raised in a “Christian home?” How did (or didn’t) your parents teach you about God? If you are a parent now, what are you doing to make God real?

42 thoughts on “Raising Kids that Will Love God”