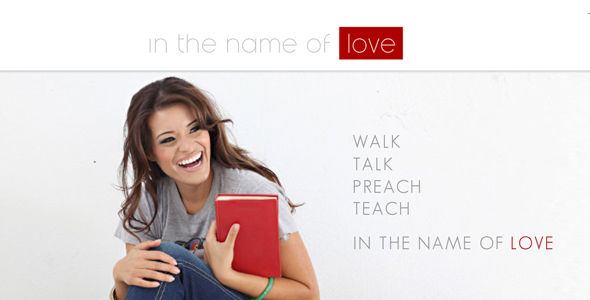 Today is part 3 of the Women in Ministry series on Modern Reject. I have written about the different schools of thought on the subject, as well as my personal stance. Through the ongoing conversation regarding women serving in ministry, some great questions were raised, like: Can women teach men? Is that possible without them exerting authority over them? Today, I am writing about one particular woman in ministry named Bianca Juarez who happens to speak in front of many different audiences, from high schoolers to women’s groups. Today’s post is a portrait of Bianca, a young woman called to a specific ministry by and through the Lord’s direction. My hope is that, in examining her ministry, it will open our eyes to the possibilities of women in ministry, both now and in the future.

Last week, I had the chance to hear Bianca speak in my hometown of Phoenix, Arizona. Her ministry is called In the Name of Love and she says this about her calling:

“…God gave me an ability to empathetically connect to people through LOVE. When I have the opportunity to speak to guys or girls, teens or seniors, those humbly broken or seemingly perfect, I do so in the name of LOVE. 1 John 4:8 says that God is LOVE. It is the LOVE of God that motivates me to continue to press forward and be a siren to those lost at sea, a screamer to those who are deaf to the pleas of Christ, and a sounding board to those who need answers when the world offers none.”

Bianca spoke at Grand Canyon University, in the chapel service, where hundreds of college-aged students filed in and filled up seats. She is unassuming, in her heels and small Puerto Rican frame. It doesn’t hurt that she is pretty. She walked upon the stage and people automatically looked at her, not knowing what passion can lie in such a package.

Bianca proved to be a kind of dynamo. A locomotive that begins slow and steady but then gains momentum, churns steam, powerful, yet focused–one destination in mind, speaking God’s message of love. What began simply and almost sweetly became powerful and motivational, even inspirational. I found myself wiping tears from my face, for what seemed like no apparent reason, except that she invites the Spirit.

It is tempting to compare her to Beth Moore. I wanted to, that was until I heard her teach–until I heard her preach. She has her own unique message to tell, in her own unique way. She says she is “not a speaker,” but that she speaks. I agree. She is not a speaker. She is a teacher. The rarest of forms, as well. A teacher who is neither polished, nor professional, but who commands an audience because of one thing: an anointing. I don’t use that word often or casually. But when the shoe fits…

Bianca Juarez is a teacher who somewhere in the midst of her impassioned preaching, takes steps into and under the anointing of the Holy Spirit. It is like listening to a child sing who displays extraordinary talent. There is a mix of wonder and pure pleasure along with the knowledge that they are not just lucky, but gifted–set apart even, to do that one thing.

Following her teaching, I had the opportunity to have lunch with Bianca and three other bloggers. My hope was to ask her a few questions regarding women in ministry and where, she, a teacher, sees her role in the church. Where could she speak? Who would invite her to speak?

She found that colleges and universities were a welcome environment because no one was concerned with her exerting “authority” over a man. If she wasn’t at a church it was more neutral ground. She went on to express the view, however, that the church and church leadership should “not invite a girl just because she is a girl” to speak or teach. Instead, she desires that the church be promoting and giving focus to anyone who is what she calls “legit,” not just individuals who are seen as “Christian superstars,” so to speak.

When asked how she handles people labeling her as such, she responded, “People believe in what I say because I am not trying to sell Jesus.” She commented, however, that many people are, in fact, trying to sell Christianity. She believes the result is mediocre leadership and less impact for the Kingdom. While some want to call her a professional in ministry, she explained, “It is a business, but also a labor of love.” Her ministry allows her to pay some bills (but definitely not all the bills), so in that regard, it is a business, but really it is her calling and heart’s desire.

When asked if she thought the church as a whole was doing a good job in embracing women in ministry, she said, “I think those that are doing it , are doing it really well and those that are not, aren’t.” Surprisingly though, as Bianca continued, she expressed great frustration, not at the way the church embraces (or fails to embrace) women in ministry, but how the church is, according to her, “culturally 10 years behind”.

“Do I think the church will ever be on the forefront of culture?” she asked. “My hope is yes, but the truth is we [the church] will always be a minority.” Bianca sees the cultural gap within the church as a major obstacle in bringing unity to the body and reaching those outside the church.

Through our conversation, I saw a woman who is not hung up on that fact that she is teacher who happens to be female. Instead, she sees herself as a woman blessed by “the doors the Lord has opened.” She has been faithful to walk through those doors without knowing what the future holds. Her heart longs to see unity within the body, not just across gender lines, but across socioeconomic and cultural lines, as well.

Bianca was married just a few months ago to the love of her life, Matt. When asked what she sees her teaching ministry looking like in 5 years, she answers humbly and honestly: “Matt and Bianca, doing In the Name of Love… doing what… I don’t know.” She explained how, more than anything though, she wants to protect her marriage at whatever cost, ministry or no ministry.

Bianca may not know all that the Lord has in store for her and her ministry, but seeing her upon that stage at Grand Canyon University, any doubts people may hold about her calling are instantly washed away. She admittedly doesn’t want to be compared to other well-known female teachers, and she won’t be–she is who God made her to be, doing the work God has called her to do.

Bianca Juarez is a voice of the Lord, intent on sharing Christ’s love through her personal story and through the power of the Word. She seamlessly blends humor (lots of it) with pain, and humility with authority. I watched college students in their seats shift from slightly uncertain about the young woman in heels standing before them, to motivated and encouraged to believe God. She told the students that afternoon that “God is present. God does care. God is good.” Her life and ministry are proof.

Who are some women in ministry who have inspired you? Do you have any questions for Bianca? What would they be? How has the Women in Ministry series solidified or challenged your thinking? Let’s keep the discussion going. It is such a good one…

24 thoughts on “Women in Ministry, Part 3: A Portrait of Bianca Juarez”