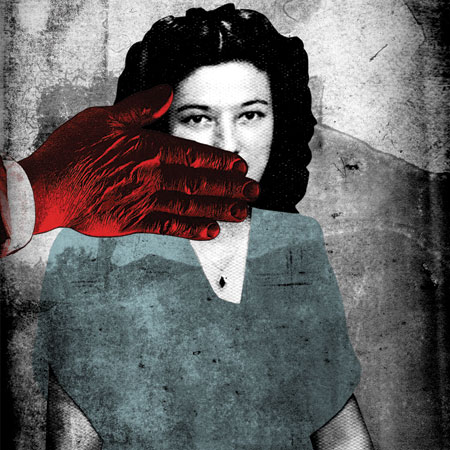 “Edgy,” “fresh,” “sharp,” those are some of the words that have been used to describe Modern Reject. I like those words. I like to think they describe me, as well. But how about these words…

“Controversial,” “scandalous,”, and a “boat-rocker,”? I like those descriptions… only, maybe a little less. Since I started blogging a few months ago, I have quickly had to learn how to handle  those who disagree with my opinion or stance on a particular issue.

I have been surprised by the comments I have received. Some loving, some not so much. Some people really do desire to understand and discuss. Some people just want to pick a fight. I’m game for a fight, always have been, but somehow I don’t think that is what the Lord has in mind for me.

Last Friday, for instance, I wrote a post called (Un)Favorite Things, in which I poked fun at people who are one-uppers, folks with shaggy hair, and {duh duh, duh duh, insert jaws music here}… liberals. Shriek! Turns out, people don’t like jokes about liberals, especially if they are one. Who knew?

The trouble is, my mouth…<Begin Rant>

I have always liked a good debate.  I remember as a child, drooling over oral presentation day where you could come to class and discuss any topic (appropriate to a 4th grader) and try to persuade your classmates. If I managed to persuade their thinking, it was like winning the ultimate prize, but winning it with your mouth.

Earlier this week, I was confronted with a private message, from a reader of Modern Reject who found my comment about liberals on Friday’s post to be “mean”. We went back and forth in conversation. I apologized for offending. She said she wouldn’t read MR anymore. I was shocked. I told her that. She apologized for seeming to “write me off” or “punish me.” We concluded our exchange with her stating, once again, that she will, in fact, not read Modern Reject any longer. Major bummer. I felt like I lost.

The one thing she asked for in our exchange was for me to “revise” my original post. She wanted me to change what I had written, as if I had somehow had a momentary brain aneurysm and had falsely written about liberals in that moment. But I hadn’t. I knew exactly what I wrote and I stand by it. It was meant to be funny. It was meant to be lighthearted. She didn’t seem to agree. Instead she wanted me to rollover and say, “You win. I’ll change what I wrote.”

I know that I have written things that have hurt people, although never intentionally. My liberal comment was obviously one of them. I never set out to offend, or hurt people’s feelings. I am opinionated yet I never want my opinions to be used as an excuse to act unloving or unkind. Unfortunately, I can’t erase every offense. I can sincerely ask for forgiveness and move on.

This person’s response to my comment, which, while flippant, was not cruel, threw me for a loop.  I’ll admit what I wrote was perhaps not written with the greatest amount of love or concern. I did apologize to her, but it wasn’t enough. But, in the name of brothers and sisters, can’t we just forgive and move on? Do we really need to respond so emotionally, as to stop reading a blog we like, because one comment ruffled our feathers? I, for instance, read a number of blogs that challenge, provoke, and stimulate my thinking, even though I don’t agree with them. In fact, some just plain tick me off, but I still come back for more, because it grows me.

Furthermore, what is the point of a conviction, if we can so easily be persuaded away from it? What kind of opinionated blogger chick would I be if I just said to her, “Yup. I’ll change it. Let me get right on that.” What value and power of conviction would my beliefs hold if I just “revised” them because I, perhaps, offended someone?

Agreement in our culture has become some kind of virtue. I blame the Left (not liberals, but the Left). There, I said it (again). Agreeing does not make the world a better place. Seeing-eye-to-eye is not a necessary character trait in an individual or the key component to a friendship. Sure, I like my friends to hold similar values, beliefs, and even hobbies, but I would never write someone off because they don’t agree with me on 100% of the issues, 100% of the time. (This gives me an idea for another post.)

Who lives in a world like that? My husband is a wonderful friend to me. We share so many loves, but, no, we do not see eye-to-eye on everything. How could we? What’s that quote again? Something about one of us being unnecessary.

I wonder at what point in our culture people became so afraid to say what they believe? And more than that, at what point did others decide any opposing viewpoint is worthy of social banishment? Agreement for agreements’ sake is pandering and nauseating.

I like writing everyday on Modern Reject because I like discussing with all of you. I enjoy the process of throwing ideas out, whether right or wrong, and letting them float down and hit upon something. I love discovering something new–a new perspective, a new angle, a new insight, a new Word from the Lord. I’m not seeking agreement, but I am seeking discussion and openness.

Chances are, if you stick around here long enough, I may offend you. I won’t have done it intentionally and I’ll be sorry and apologetic when I do. I’ll ask for your forgiveness and hopefully you will understand that my big mouth sometimes has a mind of its own. And right now God is working on that, one small sentence at a time, helping my words to be impactful, but not harmful; truthful, but spoken in love.

Do you ever find yourself defending your position? Is agreeing for agreement’s sake a good thing or not? How do you handle criticism?

42 thoughts on “The Trouble with My Mouth”